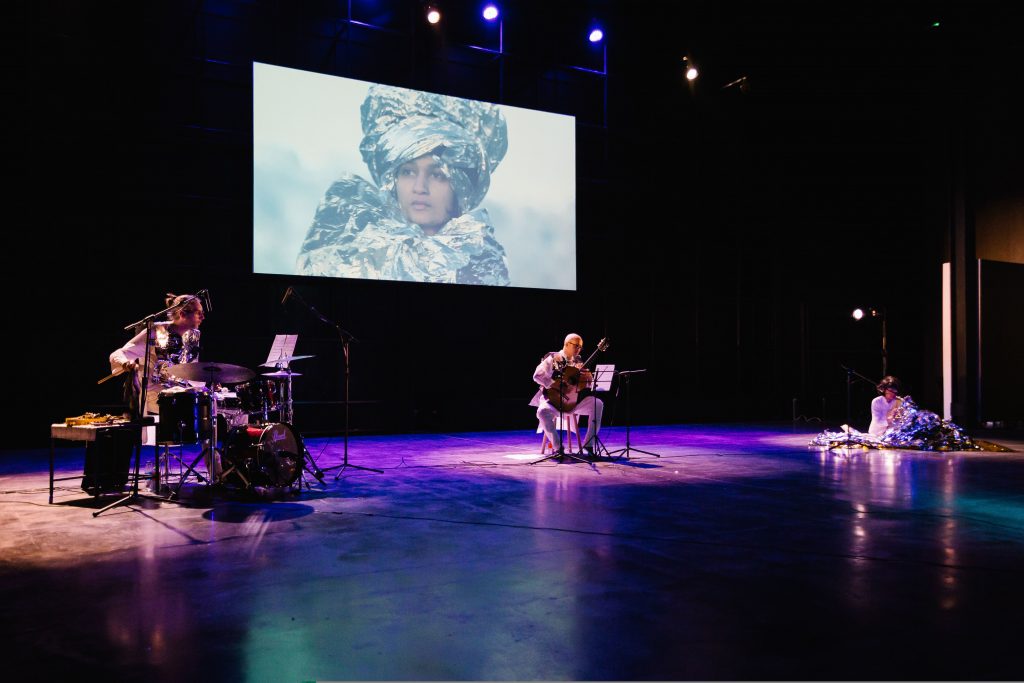 Himali Singh Soin with David Soin Tappeser and Shyamant Behal, we are opposite like that, 2019.
Commissioned by Forma Arts, Frieze and Channel 4 Random Acts.

The performance ‘we are opposite like that’ is the live-scoring of the video with poetry, percussion, a harp made of emergency blanket, guitar and a string quartet.

Pairing poetry and archival material, the video recounts the tale of the omnipresent anxiety in Victorian England of an imminent glacial epoch. The disorienting fear of an invasive periphery sent shudders through the colonial enterprise, the tremors of which can be felt in contemporary times. Here, an alien figure traverses the blank, oblivious whiteness, and undergoes an Ovidian transformation into glimmering ice.

This imagery floats above an endangered, soon to be mythical, soundscape: Inspired by field recordings, an original score for string quartet makes audible the sheets of Pancake Ice smashing into each other, the long drone of a boat, the hard timbre of the wind. The tempo is controlled by her shifting latitudes, the dynamics by the temperature variances between the late nineteenth century and her recent expedition.

The performance took place at Concrete, the OMA-designed building shortlisted for the 2019 Aga Khan Award for Architecture.

Himali Singh Soin is a writer and artist based between London and Delhi. She uses metaphors from outer space and the natural environment to construct imaginary cosmologies of interferences, entanglements, deep voids, debris, delays, alienation, distance and intimacy. Singh Soin’s work we are opposite like that, 2019 will be brought to the festival by Block Universe. This video work, commissioned for the Frieze Artist Award 2019, will be staged in the form of a performance with live narration and musical accompaniment. Building on her ongoing research into remote areas of the Arctic and Antarctic circles, Soin tells these stories from the nonhuman perspective of ice, a melting fossil that has witnessed historic changes throughout time. For the project, she will also zero in on Britain and the fear of immigration during the Victorian age to try to answer questions such as: Has Britain always feared the encroachment of the outside world?